Today has been a great Sunday. I wanted to say we were lazy but really we did quite a bit. I cooked 5 meals for this week and got them ready so we just have to pop them in the oven, which will save time and money since sometimes (more often than it should) I come home not wanting to cook and we go out instead. I also worked on a Christmas gifts, finishing up craft projects and blogging. But in all honestly, most of the day we were laying around, like the pictures below show.
This was while Stephen was on the phone with his brother after the BCS rankings came out and it was official that Alabama and LSU will have a rematch fighting for the National Championship on January 9! You can tell he is quite happy. I can’t believe how much I know about football now and how excited I really am for that game and if you really want to know why it is a big deal that those two teams (from the same conference) were selected, I can tell you all about it – well actually I can repeat what I have heard from Stephen and his conversations with his brother!
I just couldn’t resist snapping this with Molly, she is just so cute! 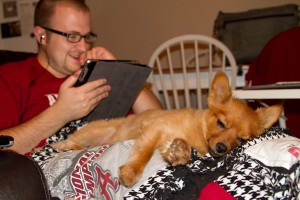 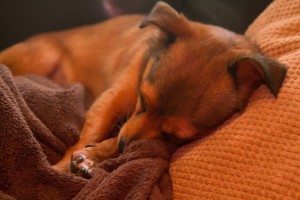 Molly has the hairiest feet! We just cut her hair like a month ago and already the hair is coming out of his paws! I just love them both so much! 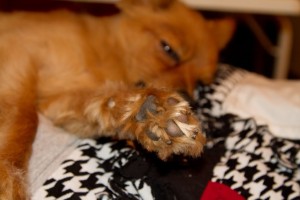