The Birmingham, AL Zoo has a great exhibit going on right now, the Dino Discovery They’re Back at the Birmingham, AL Zoo. I meant to share this when we first went but the pictures I took with my phone just didn’t do it justice so I had to take the kids back again. It’s open through the end of July.

We keep a membership at the Birmingham Zoo, just like we do at the McWane Science Center. The membership makes a great grandparent gift and is something we use all year long. It saves us a lot of money and provides us with a great entertainment option. Sometimes we go just for the splash pad in the summer. I highly recommend it. With a dino loving toddler, I was just a wee bit excited when I hear this exhibit was coming. 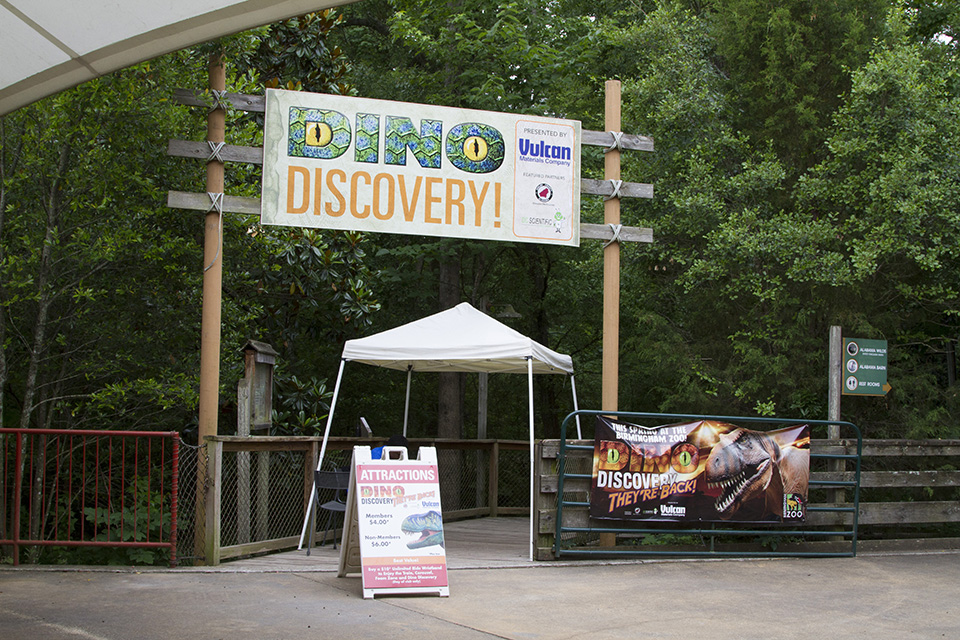 This exhibit does cost a little extra but for members it is a couple dollars off per person. I think it is worth the extra cost, so much so that we have been a few times and plan to go at least once before it leaves the zoo. Your ticket only grants you access for one walk through, so be sure to take your time, it isn’t an all day pass thing. 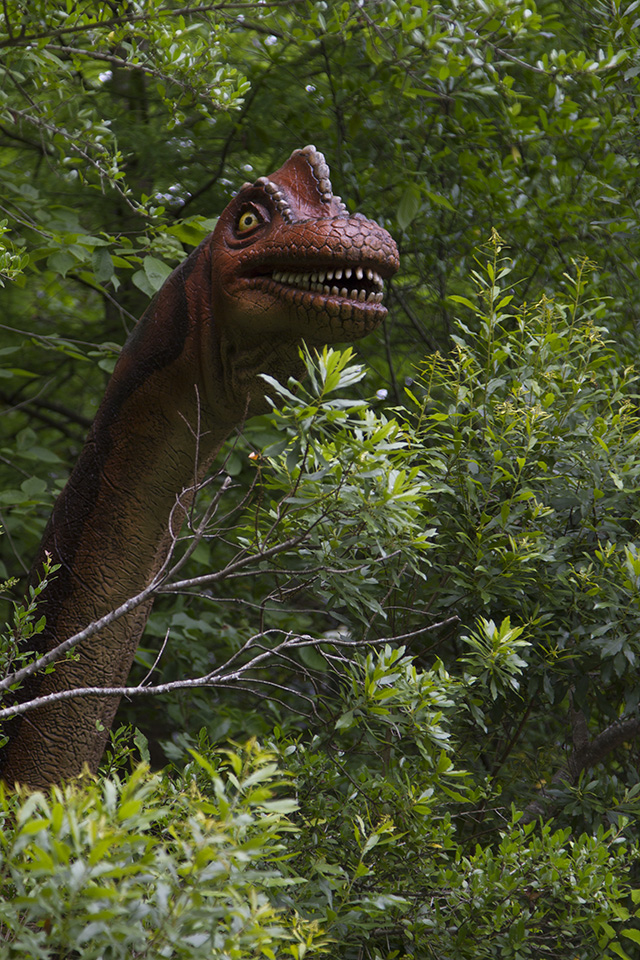 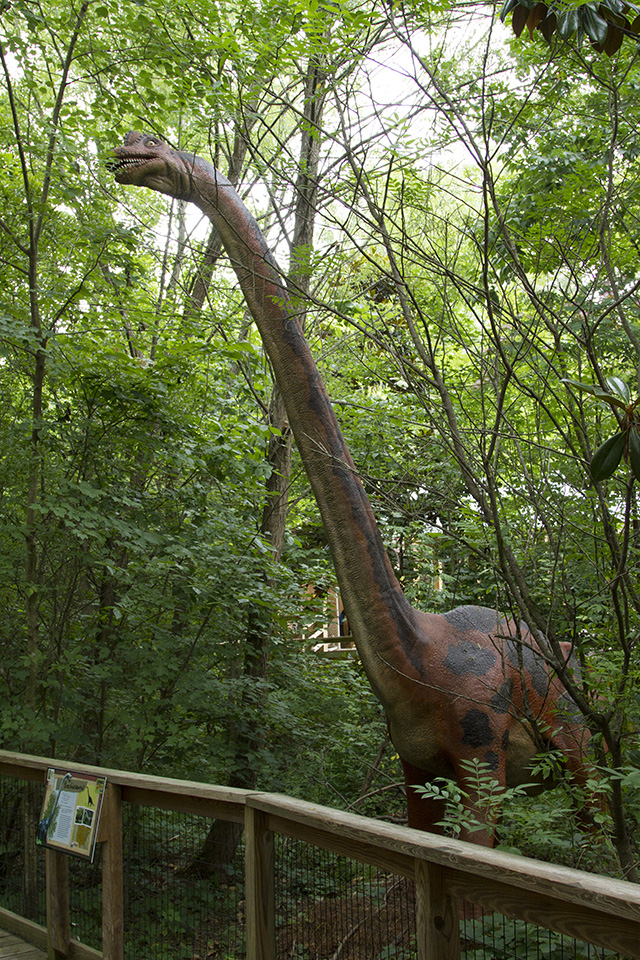 The details on the dinos is excellent. They are full size and some move and make noises. It’s a nice stroll down through the zoo. Each dinosaur has an info plaque with their details and where they are found.

My son was pretty much freaking out as soon as we walked through the entry. He was so excited and yelling out the dinosaur names. There were some zoo keepers working on one of the pachycephalosaurus’ when we walked by and my son shouted out what they were and was jumping and pointing excitedly. They commented how impressed they were with his pronunciation. This kid is brilliant and very knowledgeable about dinosaurs. There have been many times that I thought he misidentified a dinosaur to only be sorely mistaken. He loves his dinosaur encyclopedia and I’ve learned a lot since his obsession started.  This was such a great experience. 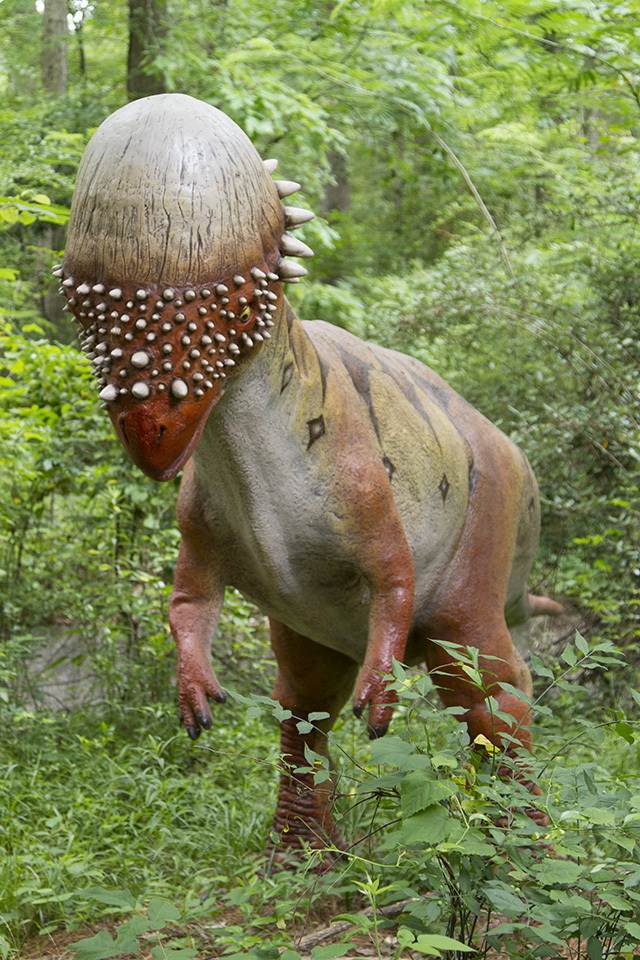 The details on these things is amazing. 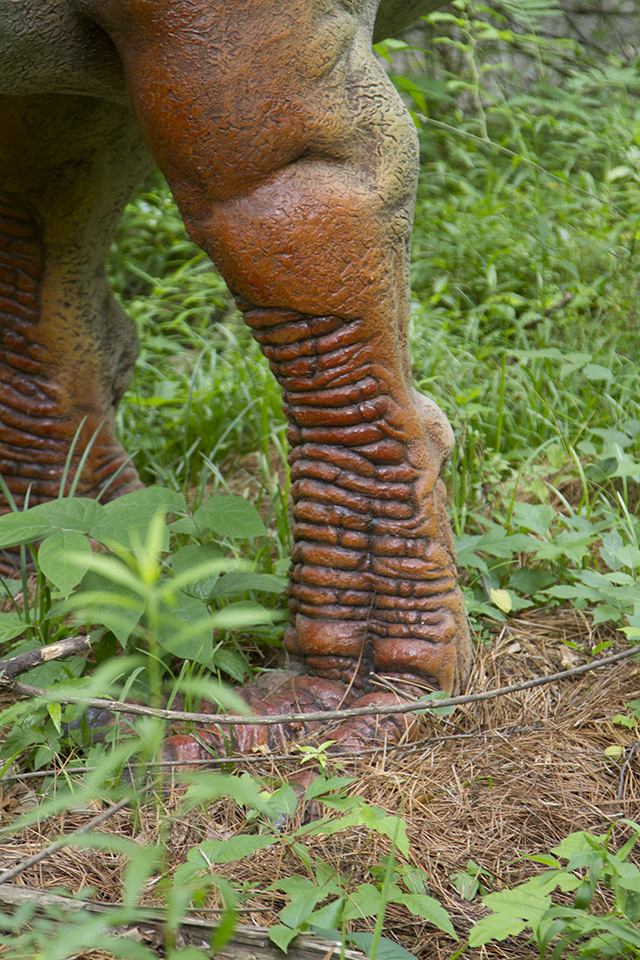 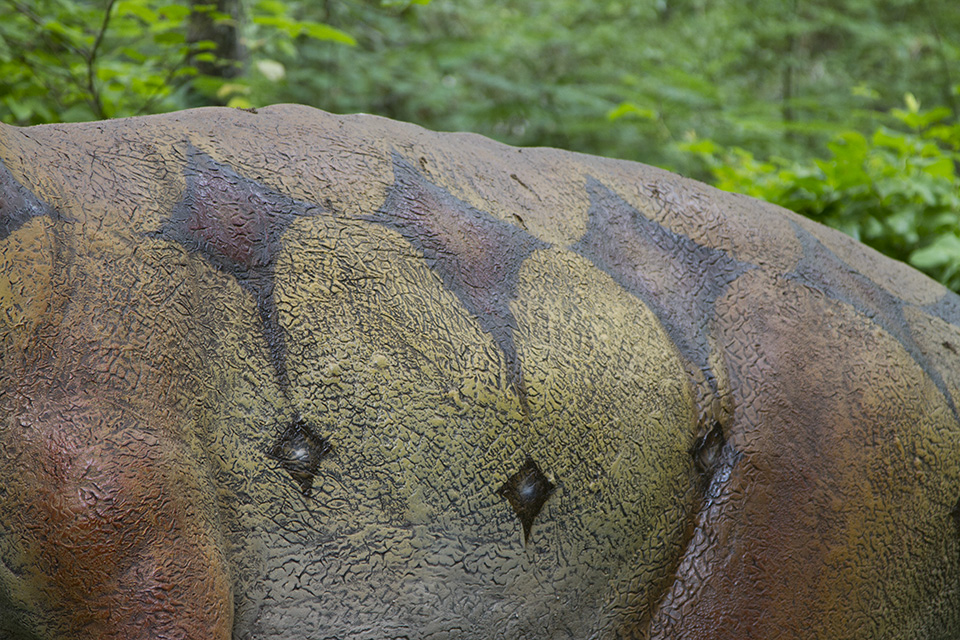 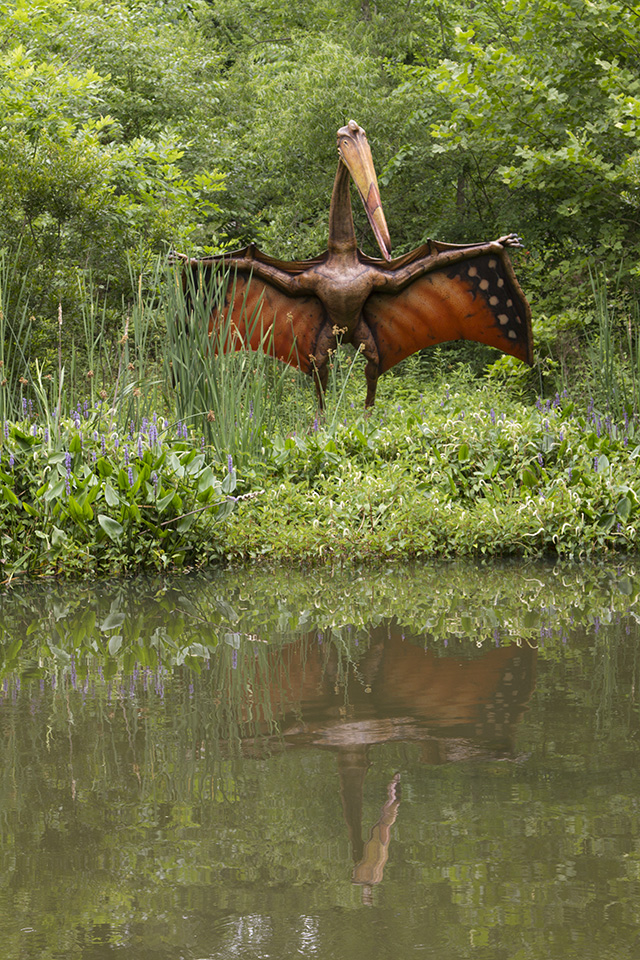 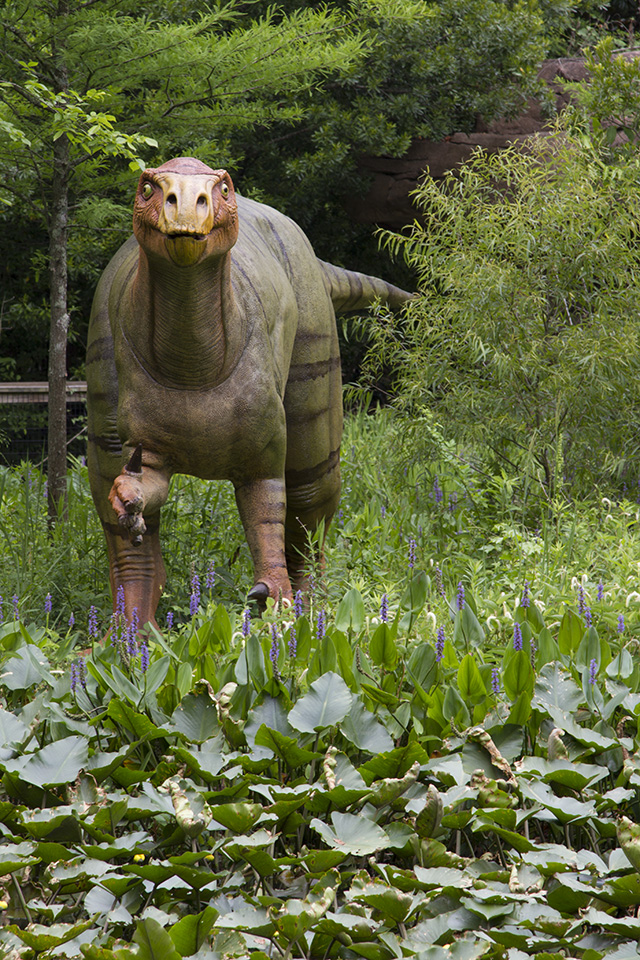 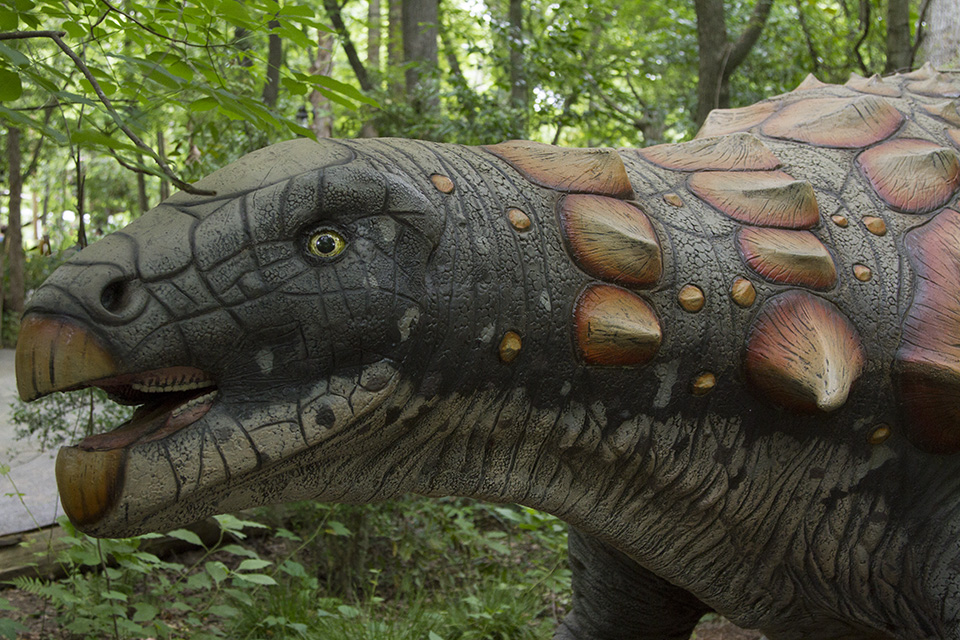 There are  dilophosaurus’ hidden behind the bushes, the adult one squirts out water. I thought I had the timer down but got hit right in the face. My kids thought it was hilarious, so it was worth it. 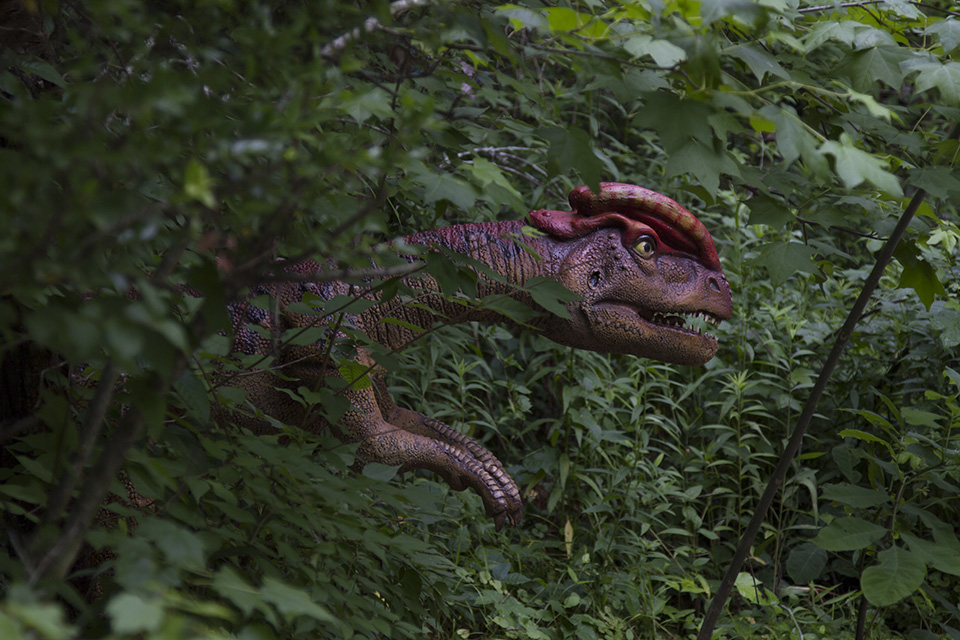 The winner of the show was the t-rex. 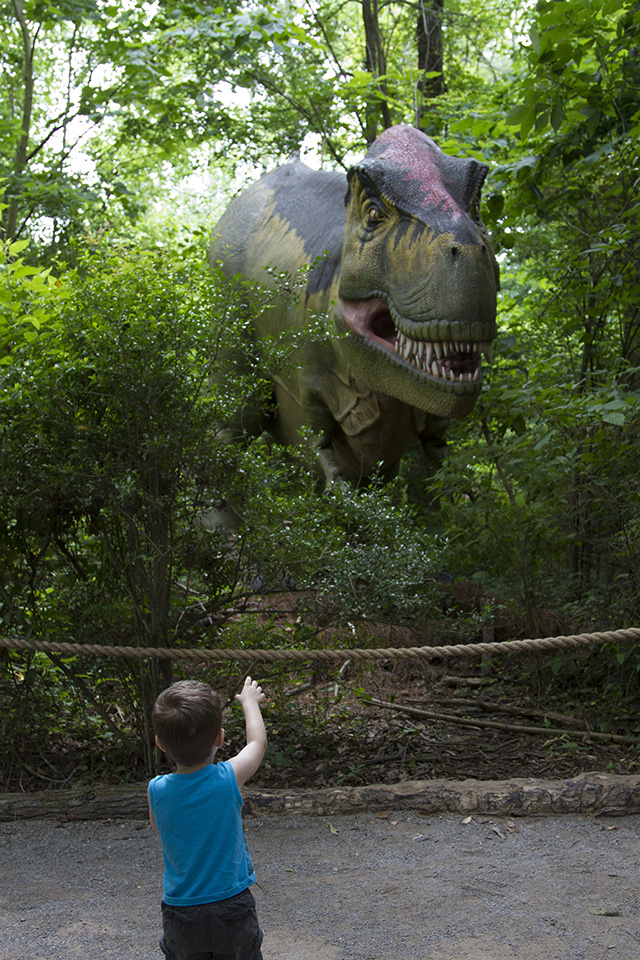 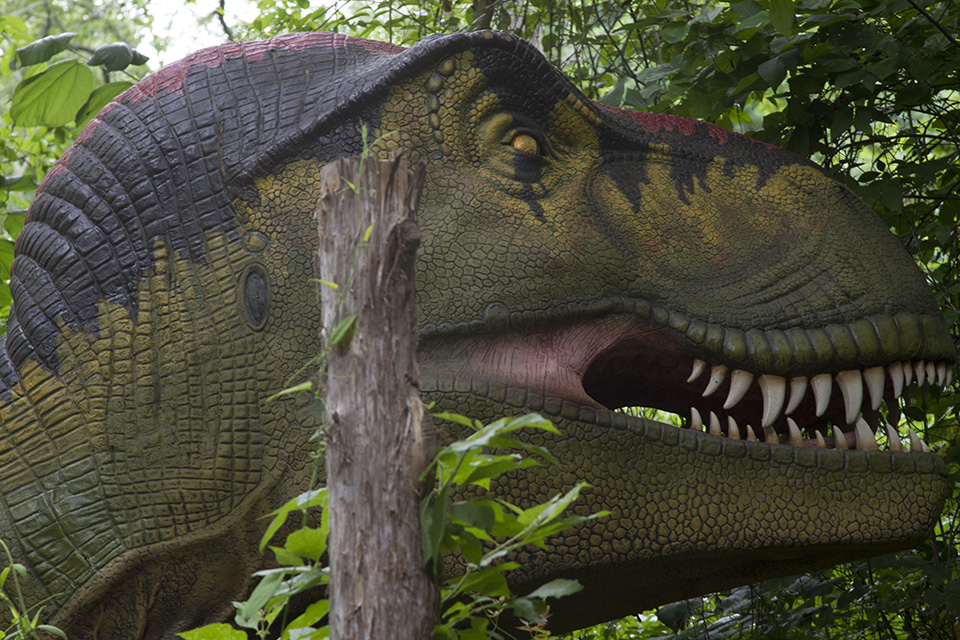 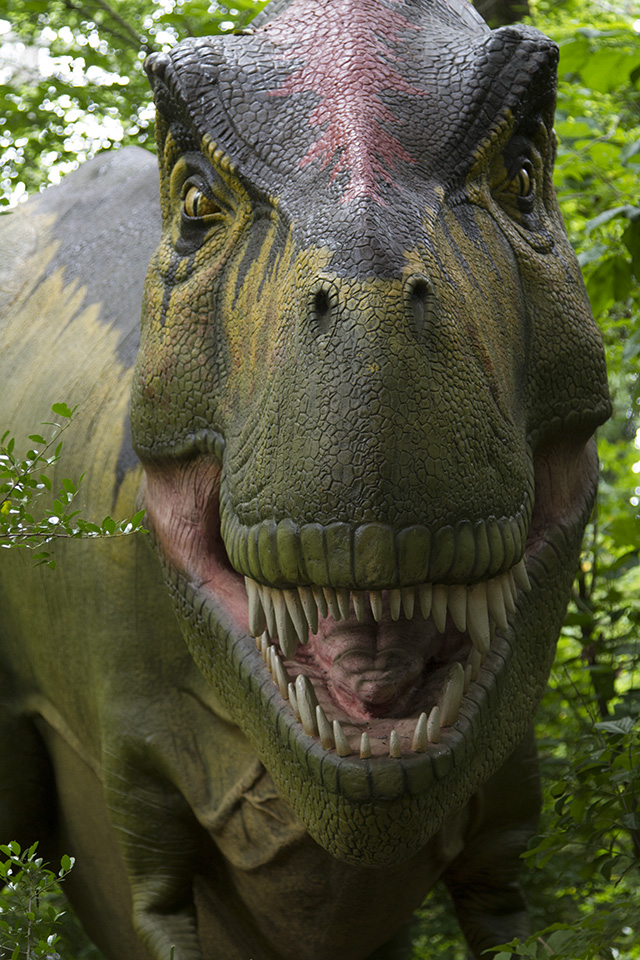 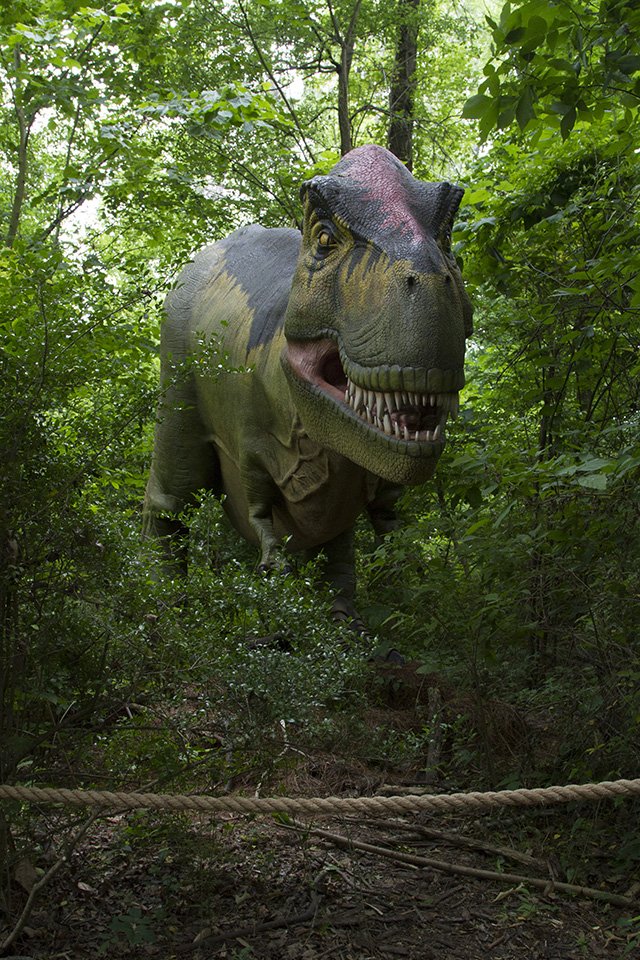 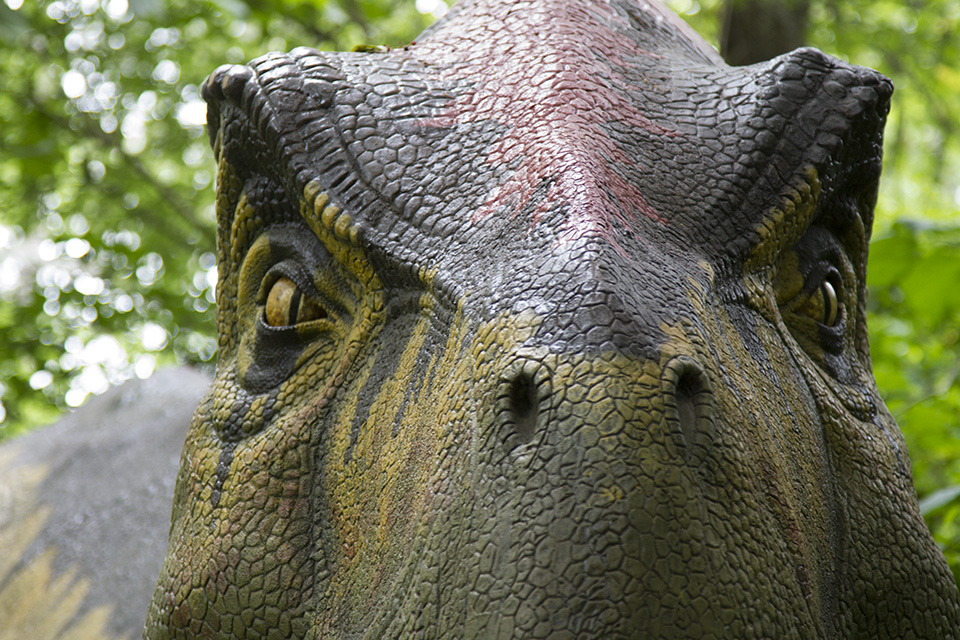 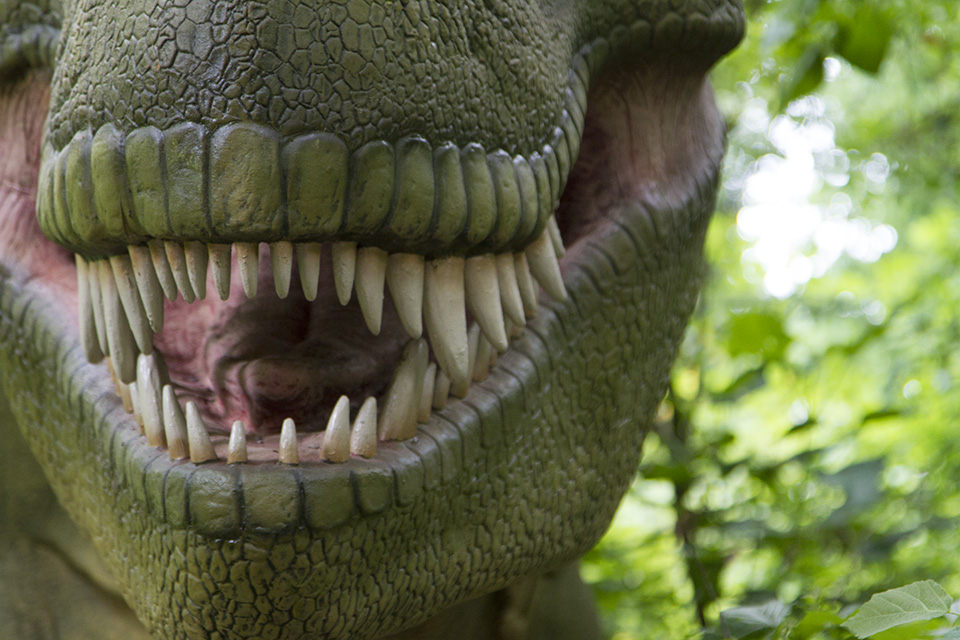 This was the most graphic part of the exhibit. It’s set back a little ways but something that some kids may have a hard time seeing. 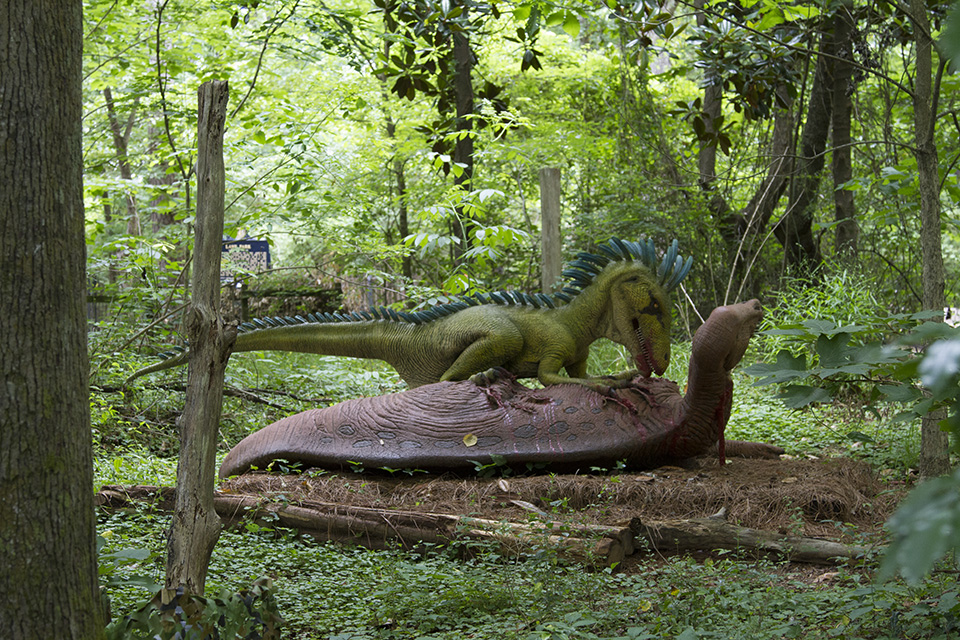 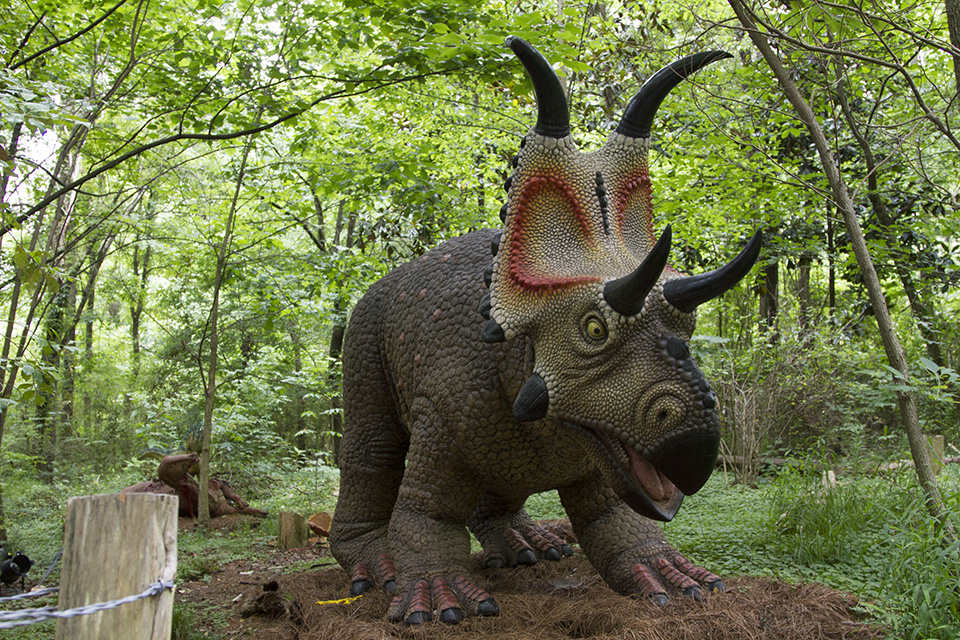 My favorite was the depiction of the Utahraptor. 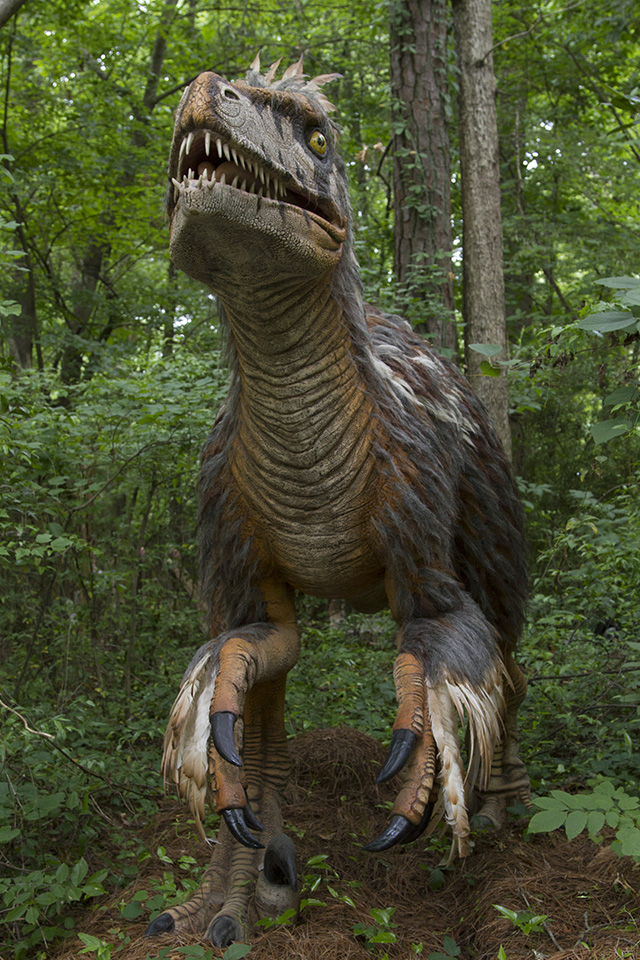 Of course, it wouldn’t be complete without a forced walk through of the dinosaur gift shop. We got caught up in the excitement the first time through and bought something for my son. We had to manage that expectation on the trips after and had some tantrums because of that but that’s parenting. 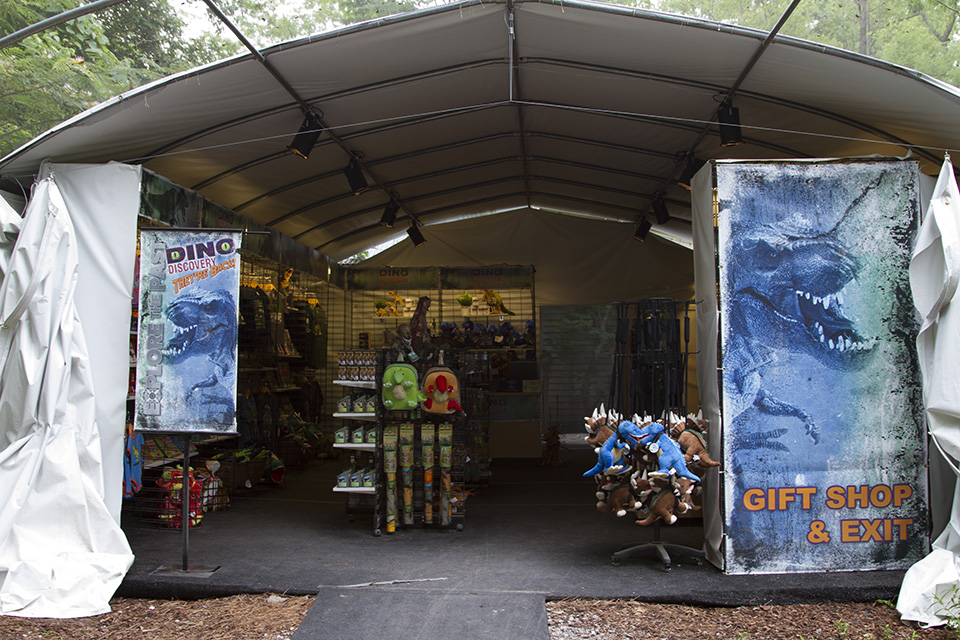 There was a pachyrhinosaurus in another part of the zoo that didn’t require the extra ticket. It was the only one that the kids could get up close to and climb on. They both enjoyed that.

We’ve been highly impressed with this exhibit and recommend it to all ages. Remember it’s only there until the end of July so be sure to visit or look for a similar exhibit in your local area. The Dino Discovery They’re Back at the Birmingham, AL Zoo was great!