I have hated my wedding pictures since the day I got the disk in the mail. I cried for a day and a half, and I had to leave work early the next day. One of my coworkers said later that she thought someone had died or something because of how I looked that day. Now maybe that was a strong reaction but I was truly and deeply upset. My engagement pictures and bridals looked great to me and I was just shocked at how awful the wedding pictures were. Most of them were blurry and made the people’s faces look awful, people in the group photos were again blurry but also cut out of the pictures, there were not very many pictures of our guests and the ones she did get were not of family, which many of them traveled here for the wedding and we will probably never have the same group of people together again. There were some that looked good but for the most part the lighting was horrid and made people look uneven if that makes sense and the pictures looked blurry. When I contacted our photographer a few months later to let her know that I didn’t like them she said “lighting is really hard” and there were plenty of pictures that she was “proud to put her name to”. Looking at some other pictures taken the same night with point and shoot cameras, the lighting seems fine so I just don’t understand. Oh well, no point dwelling anymore there is nothing I can do about it unless we recreate the whole thing… ha!

I am self taught in photoshop, mostly to design my cards. While looking at one of my favorite sites, Kevin and Amanda, I found a link to Pioneer Woman Photography which provided me some great photoshop tips and some inspiration to play around with my pictures. Since we have been married for over a year now, I feel like I can finally bring myself to look back through the wedding pictures and see if there is anything I can do to make them look better. Here are some pictures to show the blurriness and the weird lighting (you can click on the picture to make it bigger!):

This was one of my favorite pictures from the wedding, we used it on our thank you card, however I only liked it in black and white. If you look close the faces look blurry, like my sister(flower girl) in the back and my eyes look like black dots and shadowy. Just not what I would expect even when this is one of my favorites 🙁

Do you see what I mean about the black dot eyes? Everyone has them, the pictures is not sharp or crisp at all. The edges of the bodies further in the pictures are again not sharp and kind of fuzzy around the edges???

Okay so this big family group small actually looks okay but when it is bigger the people on the sides are fuzzy again and we get the black dot eyes. The lighting just rubs me wrong! 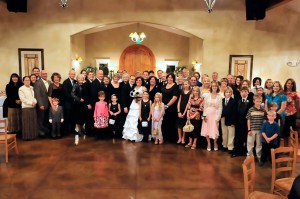 Again with this one. 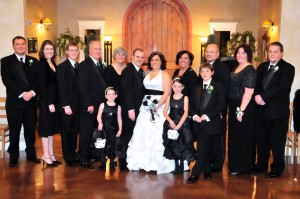 I put the next ones right after each other because they are very similar pictures and were taken right after one another and even between these two the lighting looks different. In the first one the black in the suits and flower girl dress looks dark and in the second one it looks dull. I just don’t like either of them. 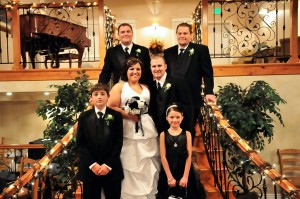 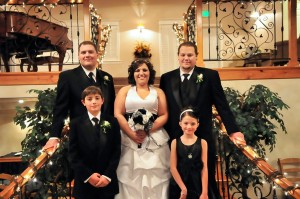 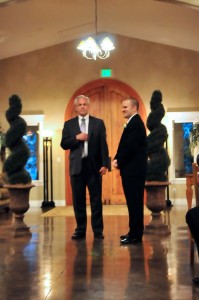 This one you can tell more up close but the people in the seats are fuzzy as well. It is an OK picture.

My dad walking Kari to her seat. Looks totally crappy! 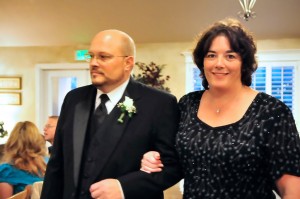 I like this one but again with the lighting when it is bigger. 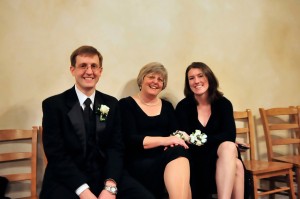 Just not good in my opinion! 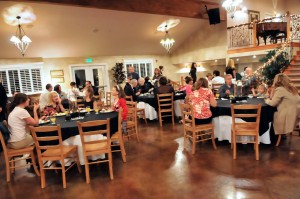 Just looks amature to me. 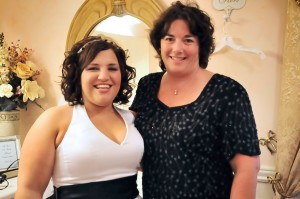 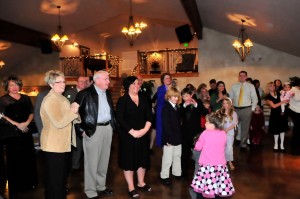 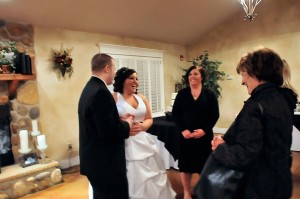 This one is not bad but like his hands look like it would be a good picture but his face doesn’t look as clear as it should just uneven. Maybe I am being too picky on this one because I like it still. 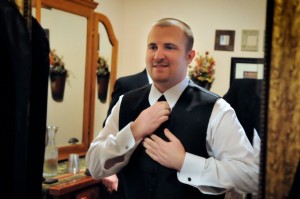 When looking at this bigger they are all fuzzy and I could see that with my mom moving to catch the bouquet but the other people standing still look fuzzy too. 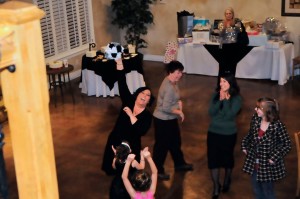 I was really looking forward to a good “send off” picture but this one just doesn’t cut it for me. 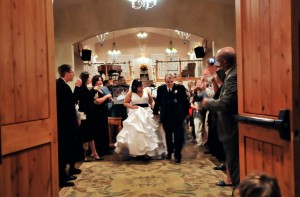 Here is what I have done, some of the changes are subtle but I like my version better and it was fun to learn some new things in photoshop and might as well use these as a learning experience. What do you think? 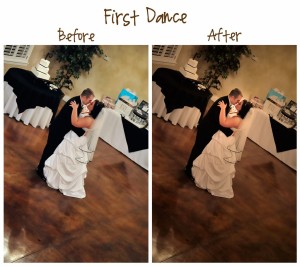 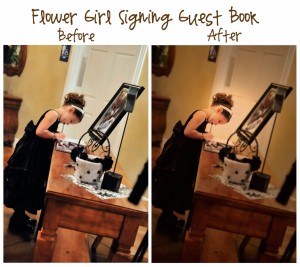 The original of this one is not bad at all, but I love the second one, it just has a classic look.

I titled this one wrong but it is Stephen’s family. I think the second picture makes the skin tone look better and more even.

I love this picture of Stephen. I like the effect on the second picture but the first looks pretty good to me in comparison to everything else we got. 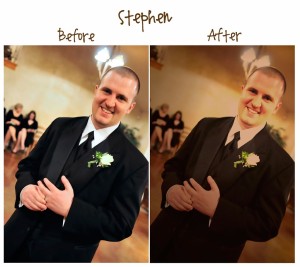 I just think this looks cool, I don’t know why!

This picture really pissed me off when I got the disk. This is one of my old coworkers and his family and the original looks great. Why couldn’t some of my family pictures look as good as this? The photographer was obviously capable of this and used the right lighting settings. Also there were like 6 pictures of this family and then she didn’t catch 1/2 my family in the other crappy photos. Not that I don’t like this guy but I would just rather walk away from my wedding with pictures (good ones like this) of all my guests and especially my family. Jeremy did get a copy of this picture and it was good enough for a Christmas card so at least someone won with it! I just like the effect in the second picture. 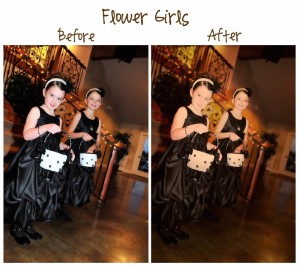 I loved this picture originally but I love the second one, this is my favorite of everything I did.

This was a little therapeutic and nice to share so I hope you enjoyed all of this! Thanks for reading!