We have two pups, Royce and Molly. They are 6 and 5. Let’s just say things get pretty stinky outside sometimes. I’ve found some ways of how to clean up pet stains and eliminate odor outdoors that I’d like to share today. 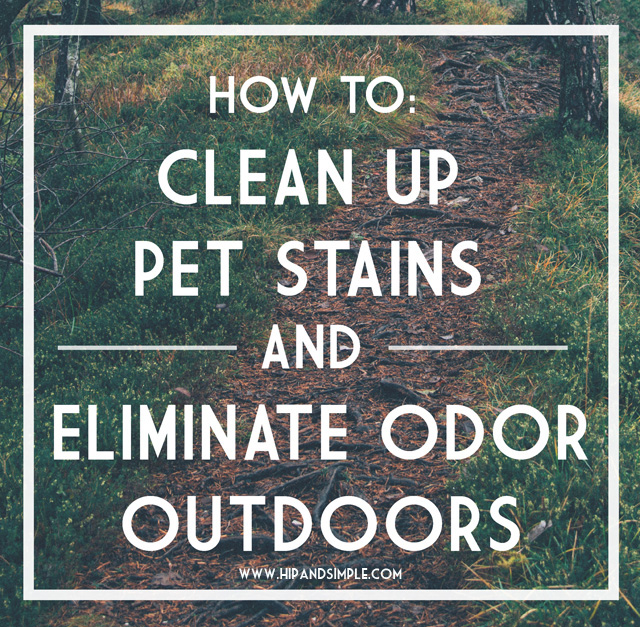 When we were living in our townhouse back in Utah, the neighbors on both sides of us had dogs. Let’s just say that the smell back there got pretty bad. We all cleaned up but sometimes it would linger. Now that we are in the South and deal with the super hot temps and the humidity, it is even worse. The big problem for me is that we are the only ones around who have dogs so it’s pretty obvious the smell is our fault. No one has said anything but I feel bad, for them and for us.

The smell has gotten worse and worse and with the weather heating up and going from hot to rain and back again, it has been somewhat unbearable at times. I’ve tried a bunch of different products and while they help for a day or so, it’s nothing that I want to try again. I’ve looked through forums, read reviews of products. The common theme I seem to find is that you waste money on store products so I’m going to share with you what I think works well for us. Make sure if you try any of these that you do a small test spot to see how it reacts to your surface and also let things dry really well before you let your fur babies out there to avoid ingestion.

This stuff smells great. I poured it on the concrete and scrubbed like crazy. I also added a spray nozzle on the bottle and sprayed it out on the dirt and grass where the dogs have some favorite spots. It really helps but I don’t think it lasts very long. Of course the dogs keep going so nothing is going to completely clear it up but I was finding that it needed to be done every couple of days or the smell would come back just as strong. That means it get’s expensive. I use about 24 oz each time so it’s just not economical but I do like the way it smells and works so I still recommend it, especially if you don’t have a big build up.

We thought about getting a power washer but after talking to the trusty guys at Lowe’s they said it really wouldn’t help get the results we were looking for. He recommended trying bleach. We went from planning to spend a couple hundred dollars to just a few. I love Lowe’s because of their customer service like that. Anyway, I was a little hesitant about that because bleach is so harsh and I didn’t want to risk my dogs getting sick from accidentally ingesting it so we kept them away from the area for a day to let it dry really well. Be sure to follow all directions and I would suggest wearing a mask, even outdoors this stuff can get to you. I was suddenly in a coughing fit after working with it for a while. I just poured it on the concrete and scrubbed away. I felt like it was okay, it smelled like a pool outside our door which was better than urine but I probably won’t do it again unless it is really bad. I will say that this felt like a good way to get rid of serious build up so I’m glad we did it and I’ll keep up another routine so that it doesn’t get to that point again.

This is the blend that I find the best. It’s really cheap and none of the ingredients are very harsh or hard to work with which makes it a huge plus. I usually have everything on hand so that helps too.

1- I start out but scrubbing on some hydrogen peroxide. Make sure it’s 3% as it can stain. I pour the whole bottle out, slowly, and over different spots on the concrete patio. Give the concrete a really good scrub with a big push brush.

2- I let that dry for a little bit and sprinkle baking soda all over everything, including the dirt/rocks where they freqently go potty.

3- Then I pour on a 1:1 ratio of vinegar and water. I scrub that into the concrete and even the dirt. You’ll need to wash off your brush after that for sure but I don’t mind if my dogs get a lick of vinegar water so I felt it was safe to use on the dirt.

4- Finally, I squirt dish soap on the concrete. I just make some fun swirls around the concrete but you could mix in a cup of the soap in a large bucket or bowl of water. Then I pour hot water and scrub away for a minute. I only do this on the concrete but you could do it on the dirt if you felt it needed it. The dish soap helps it smell a little nice but the vinegar smell is still there for a bit. It will go away though, leaving the scent of nothing, which is all I want!

This seems like an intense routine but I’m telling you it does wonders. I was just outside with the dogs and it was so nice to be able to breathe fresh air and not scrunch up my nose and run back into the house. I’m sure my neighbors appreciate it as well.

I do the dish soap and water combination in between, about every couple weeks or so. It’s super fast and it helps keep things fresh. I go with the more intense routine when I notice things are building up.

I hope this helps you. We love our little furry pets but want to keep things fresh and clean without totally breaking the bank. Have you tried something you really like outdoors? Let me know your recommendations in the comments!