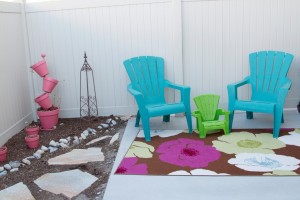 I am so excited about our new backyard. This place has been a point of shame and just plain gross most of our time living in our home. I will be very honest with you, our backyard has been mostly just a dog poop haven. Sometimes it has been so bad that I haven’t even wanted to open the windows. We used to have dogs on both sides of us (we are in a town home) and the ones that have left were big dogs. The combination of that is bound to leave some lovely aromas floating around, no matter how often it is cleaned up. This is an area I have mostly avoided but it was on my list to fix this year and I am loving how it turned out.

The space is small – really small. We have a slab of concrete and a 20 foot by 5 foot section of dirt. We tried grass a couple years back but it just encouraged weeds to grow (and they grew very tall at one point). The only alternative to a mower that we found was a weed whacker. It never looked trimmed and polished. We ripped that out and just left the dirt. I wanted a space that was low maintenance but somewhat an extension of our house and a place that I could sit in and not feel like I was surrounded by grossness. No matter how much you clean – a poop haven is still a poop haven.

The humans needed to reclaim this space! I searched online for small spaces but couldn’t find anything landscaped that was close to our space. I did find some all concrete patios that were decorated with pots and plants. I liked that look but I hate bees and I kill plants so I didn’t want too much in the way of bee attraction and something very low maintenance. I started drawing out some plans and looking for some cost effective and not too labor intensive options.

Here are a few before pictures of the space, not cleaned up to show you how it usually looked. Nice and drab, right? 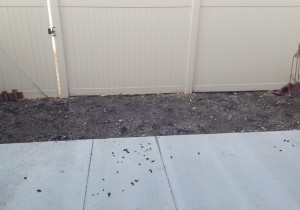 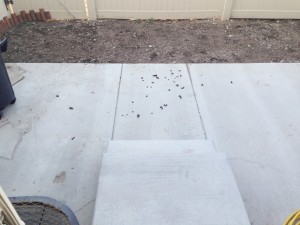 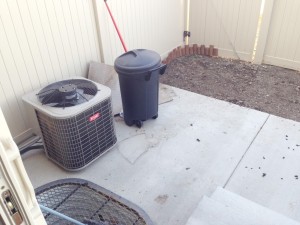 I started by digging out some dirt to make room for some large stones. This dirt was awful  It had huge rocks in it and even a big like 14 x 14 concrete slab thing. 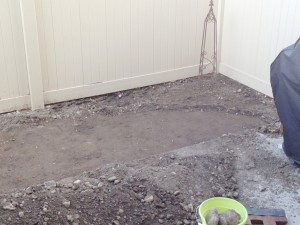 Look at the size of those rocks! We saved some of the good ones which you will see later.

Once all of that was out, we started pounding down the dirt to make it flat.

Then we spread out the stones – and by we on this part – I mean Stephen. He loaded them into the car and then hauled them through the house into the back yard and placed them! I probably could have done it, but love having him around for that stuff 🙂

We lined the side of the yard with the nice big rocks we found. Here is what we ended up with: 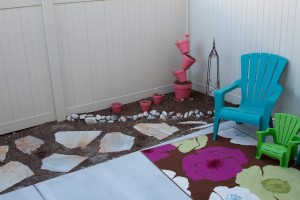 Totally cozy right? We moved the BBQ to the opposite side of the yard. Picked up a couple of bright plastic adirondack chairs from Home Depot for like $17 and a cute little one for Reece for $4 from Walmart. It was looking pretty good just like that but then I put this rug back there and it was the icing on the cake for sure.

We found this rug for $5 at Lowe’s shortly after moving into our house – so like 4.5 years ago. I just haven’t found a space that it works in so it has spent most of the time in the basement. We even tried to sell it this summer and last at a yard sale but when people would haggle me for it, I just couldn’t give it up. I think we have found the perfect home for it – and I think I remember it being an outdoor rug so hopefully it lasts!

This is a distorted view for sure but you get the idea. I scrubbed the concrete with dawn detergent, water, and a rough deck brush I found at Lowes. It was quite the work out. They have concrete cleaners but I couldn’t find one that said it was safe for dogs and I didn’t want Royce or Molly to get hurt or our neighbors dogs to have an issue! After that dried overnight, I put on a “wet look” concrete sealer. I am not blown away by the cosmetic results but we had a little chipping at the concrete that has stopped so it is doing it’s job. It just doesn’t look the way it says it would, which is wet, even after 4 coats of that stuff! 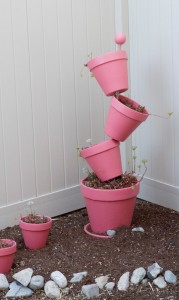 I made this planter thing from a picture I found on Pinterest. It was super easy, just put a pot upside down in the main base pot, stick a wooden dowel through and put on other pots at an angle, top with a wood circle and add some dirt! I found some sheet of mossy green plants at Costco and the guy said it was low maintenance so I was in. They have bloomed a few little flowers but nothing that is really attracting the bees and it is growing in all sorts of fun directions so it adds a little bit of flair and the color.

We only spent about $150 in total, including the new chairs so I feel like we made out pretty well. It is a nice shared space with the dogs but easy to clean and really like the look. Everything sprays down to clean really easily and we even have the garbage can and scooper for the dogs messes tucked away in the corner. It is comfortable and functional. The humans took over and I am totally loving the results.