We recently purchased a house and were looking for an excuse to show it off a bit and play our rusty hand at hosting. My four-year old and I had seen Moana in the theater twice and we really loved it. We thought what better excuse to party than throwing a Moana Party with some of our friends and their kids? 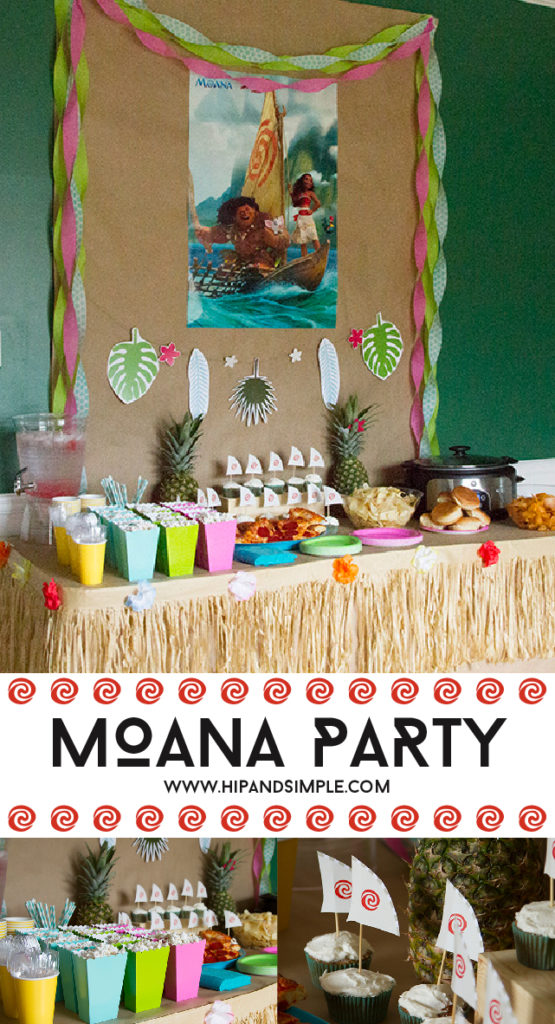 Let’s start off by talking about Moana. If you haven’t seen this yet, you are in for a real treat. I think it is my favorite Disney movie, ever. And believe me, I know Disney movies in this stage of parenting. It is a great story, so beautifully animated, no romantic story for a young girl, her parents are alive, feminine strength and power, and discovering that you have the power to be able to change things yourself. My husband read an article about how the hardest part of the animation was the hair because it almost had to be done strand by strand to look like it was moving. There was a lot of it and both main characters had longer hair that swung around. If you think about other animated characters they mostly have just one piece of hair on their head that moves all together. I find that fascinating.

This Moana party was mostly about the movie so the biggest thing for me was the decorated table. I don’t really go this all out for my kid’s birthdays much but I felt inspired by this one and we were having a lot of fun as a family getting everything ready for it.

I kept things simple and cost effective by choosing decorations that we either had or were inexpensive, like my huge roll of butcher paper that served as the backdrop and table covering. We use that butcher paper for packing up my wood signs when I was focused on selling on Etsy, gift wrap, drawing paper, etc. It’s so awesome and has lasted us forever. I also bought a grass skirt for a few dollars and some crepe paper. 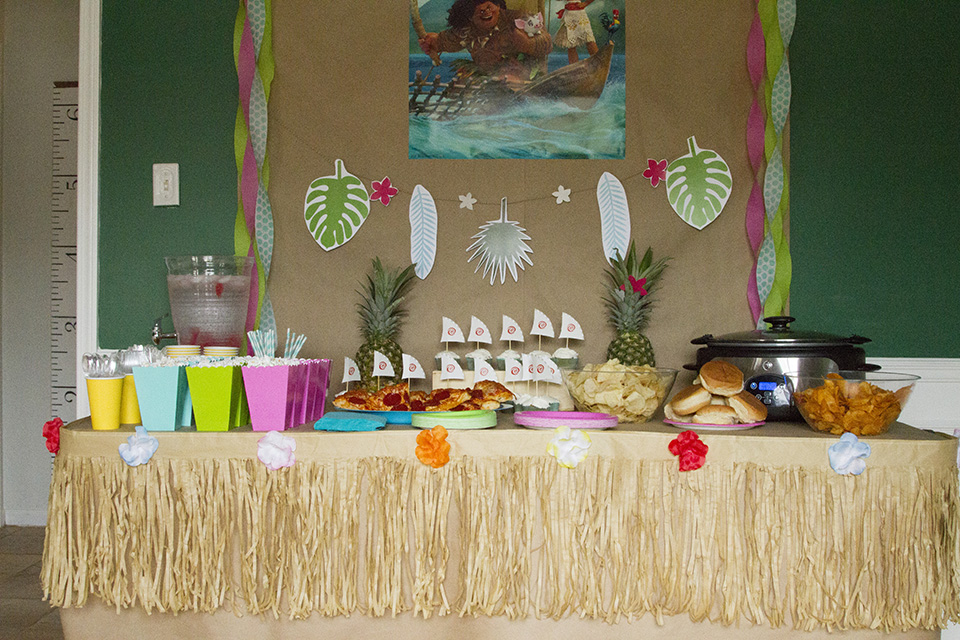 I designed and printed out the banner to hang. We found a Moana poster. And then a couple of pineapples. 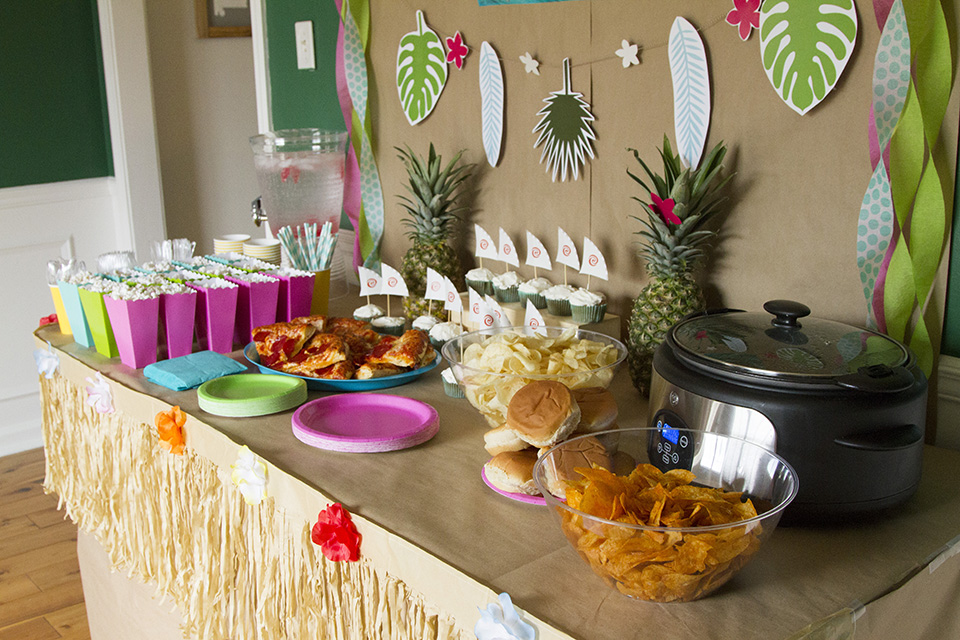 I also designed and printed some sails that went along with the movie to use as cupcake toppers. I used some bamboo skewers and just cut off the sharp tips with some kitchen shears to be sure none of the kids had anything pokey to hurt themselves with. 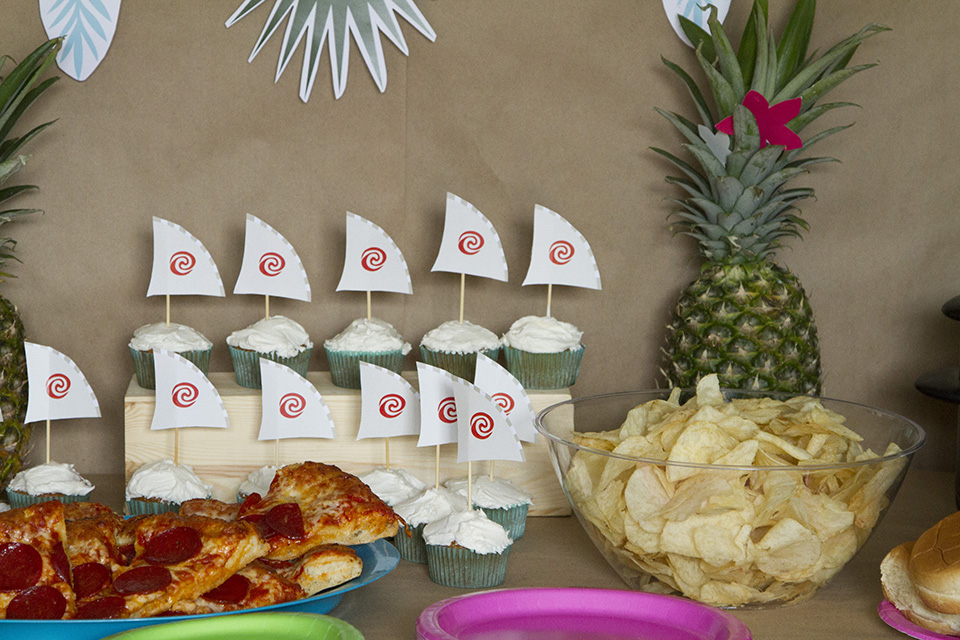 I was going to make some popcorn containers but thought about my lack of available time and picked up some colored mini popcorn boxes that had perfect colors and were easy to put together. We love popping fresh popcorn from kernels using our microwave popper. Stephen helped me by popping some about 30 minutes before people were set to arrive. 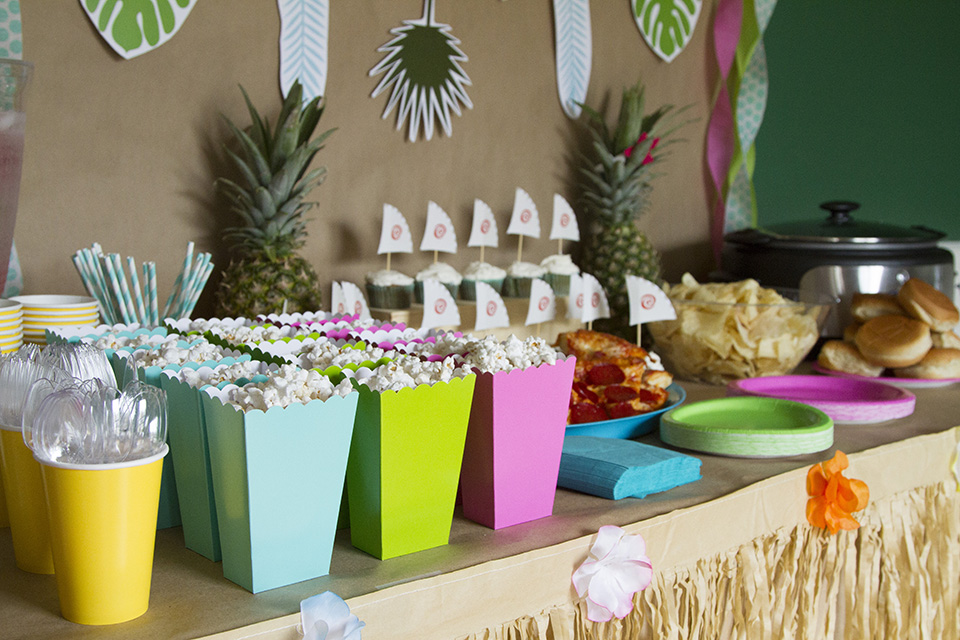 I did indulge myself and get a drink dispenser. I’ve never had one but always wanted one. I found it on sale! It will be great to use over and over. I found some tutorials for a drink called “ocean water” that is a Sonic copy-cat recipe. Well I had never had that drink before but it has coconut in it. Since it was going to be a lot of kids, I thought they would probably not love that flavor so I just took one of the blog recipe ideas and that suggested freezing Swedish Fish in ice cubes and adding it to the water for effect. This looked cool for half a second and then ended up looking like this. I filled the container with sprite and the Swedish Fish altered the taste a little bit – it was interesting. I decided to leave out the blue food color as I always worry about adding more processed stuff in – plus it can make your poop turn a different color and that can’t be a good sign! When we were cleaning out the dispenser, the Swedish Fish were so gross and slimy from starting to dissolve in the drink. Honestly, we should have just stuck to Sprite or another drink and called it good!

We served up some frozen pizzas from Aldi’s (so amazingly good – the best frozen pizza ever!) as well as my beloved Root Beer Pulled Pork that we served on buns and with some potato chips. We followed that up with homemade vanilla cupcakes and buttercream icing – so delicious. And then popcorn for the feature film.

After we had some time chatting and eating lunch, we all gathered in the living room to watch the movie. I wasn’t sure how it would go. We had 9 small kids and 6 adults. The kids were amazingly well behaved and so into the movie. It was such a fun feeling to have a full home and the space for all of these people. It was simple but so fun. I always get a little intimidated when I see nice party decorations and things on Pinterest and think they must have spent a fortune on that. And some bloggers admit to doing just that. I think they look amazing but that was just not the budget for this little get together. I kept it as conservative as possible and with all of the food, drinks, decor and the movie we spent less than $100. This would be a perfectly doable thing for a birthday party for one of my kids so I hope that helps give you some tips on how to throw a nice looking party on a budget, like we did with this Moana party. It’s funny how you plan and work for something and then in a short time it is just over and done. I felt that way after our wedding and I was so glad I didn’t stress to much and worked to really enjoy every minute because it just ends and all you are left with is the memories and feelings. 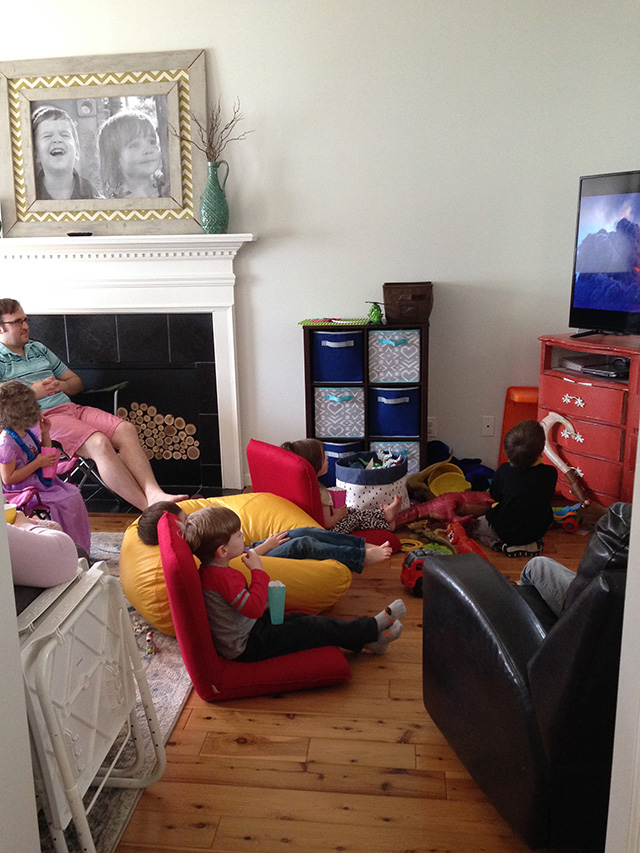 Oh and one last thing, if you haven’t seen Moana yet – go, like right now and do it! You won’t regret it! 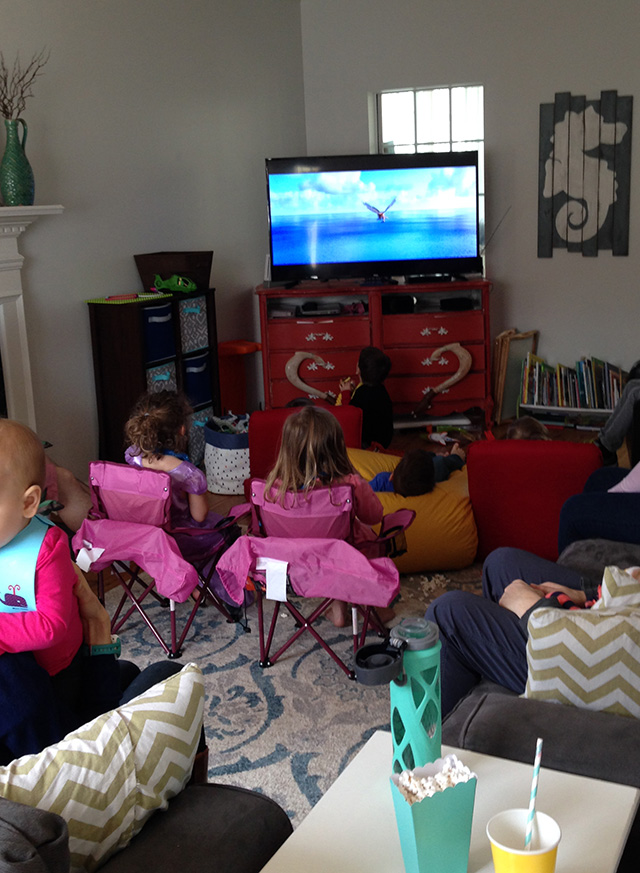