The nursery is still in progress. I have so many ideas and plans and then I get new ideas and change the plans. It is getting close to the due date so things are looking to stay closer to what they are now. I still want to wrap a few things up and get everything organized after washing clothes, bedding etc. But wanted to show a little of what I have worked on.

The nursery is pretty neutral with lots of beige, tans, browns but then also touches of blues, greens and a little grey. I have been dying to do large horizontal stripes somewhere and decided to do it here when it was going to be the guest bedroom. I left the original wall color (light tan) and just painted the white stripes, they are 18 inches and did it in the entire room.

I really wanted a mobile with different style poms but didn’t want it to be too feminine with a boy on the way, so I used burlap and linen and only did a few of them to keep it simple. Stephen helped me hang it recently and I love the way it turned out! 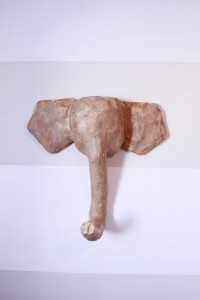 I searched for an elephant head but the ones I found were small and expensive. The closest thing to what I had in mind was from Hobby Lobby and it was over $50 and was only like 10 inches long. I found this tutorial on pinterest forever ago but saw it again recently and thought I could do that for my elephant head. Here is the inspiration: 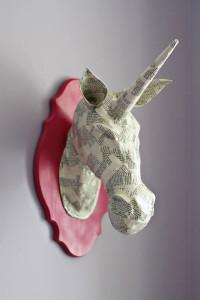 I had not done paper mache since elementary school when we made a head over a balloon so I pretty much followed all of her steps. I did search online a little and found a couple of tips like adding salt to the flour water / mixture to help eliminate molding. Also, be sure to let each layer dry completely before adding more or you run the risk of it rotting from the inside out and since this was going in a nursery, I was all about avoiding that. I used brown tissue paper instead of book pages and hung it with command strips since I figured a plaque would be a little much with this being like 20 inches wide by 30 or so inches long.

It was surprisingly easy and hardly cost anything because we had most of what we needed with the newspaper, masking tape, flour, water, paper towels, tissue paper, modge podge and command strips. I really didn’t spend too much time on it but there is significant drying time involved. After the paper towel application, I had to let it dry for about 48 hours because there were a couple spots that were still a little wet for a long time. I am really happy with the way it turned out!

I will show more of the nursery later but there is a taste for you for now! I cannot believe how soon this kid is coming! I can’t wait to meet him.