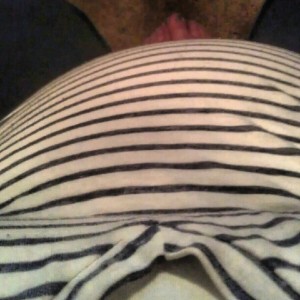 This is my current view and I am loving it! Pregnancy has not been what I expected at all. There have been some tough moments but really overall it has been much easier than I expected. I really thought I would miscarry early on. It took a long time to get pregnant so it was hard to really accept it was happening and let go of that fear. Anything is possible and I am sure I will have fears of anything happening to this kid when he gets here but so far I am grateful things have been going our way.

I know we are going to have a lot of firsts and interesting experiences coming our way so I wanted to document how it has been going lately so I can remember how this all was. We had maternity pictures done 2 weeks ago and should be getting the CD back soon so I can post some of my BB as Stephen calls it (Big Belly or Baby Belly).

Stephen has been amazing through this. He just seems to know what I need even when I don’t. He really takes care of me and watches out for me. Sometimes I feel like he is telling me what to do and it frustrates me (not at all the raging hormones speaking 🙂 ) but really, he knows I push myself too far and he is just watching out for us. At our last Dr. appointment Stephen asked what he could be doing to help out more. The Dr. seemed surprised and said what a great question. She gave him some ideas like doing dishes and housework, being supportive and available, attending birthing classes with me, etc. When I told her he already does all of that and more, she didn’t know what else to say. I feel pretty lucky with him.

Last night I was shocked awake by the baby, which happens from time to time, but this time it was different. I could feel a little pressure of his feet on the side lying on the bed and then his head was bobbing up and down near the middle of my belly. His movements have been so much more intense lately but that was the craziest. I could completely tell it was his little head and he was really pushing out my stomach. It was the coolest thing I have ever experienced. It is amazing to experience this miracle. The human body just takes care of everything.

The only complaints I have had are being tired, having heartburn, carpel tunnel and a few other minor things. I have found some products that have made it much easier to deal with.

First the carpal tunnel was keeping me up at night and it was causing me so much pain and it was pretty early on too. I picked up a Preggle pillow from Motherhood Maternity for about $40 and when I slip my arm under the pillow, it keeps any weight off my shoulder and helps with the pain. 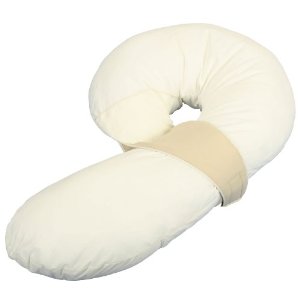 I also got gel wrist splints from Walgreens for $17 each. Stephen likes to joke that I am gearing up for a fight every night as I strap those bad boys on. There have been a couple of nights I have wanted to see if it really is as bad as I thought and I try to go without but shortly after my hands fall asleep and cause intense pain. Apparently the cure for this is giving birth so I am excited for that to go away! 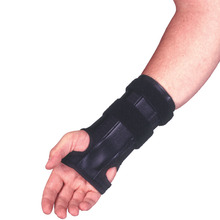 Then the heartburn. It wasn’t very consistent or too terrible at the beginning. I got the okay from the Dr. to take Zantac when it would flare up because Tums just wouldn’t cut it. That worked wonders for a while. There was a night a few weeks ago that I woke up in the bathroom over the sink and was coughing uncontrollably. It was making me throw up and my throat was killing me and my ears were burning. I could hardly breath, which in retrospect I think that was more out of panic because I was so confused about what was going on and I still don’t remember getting up out of bed just waking up over the sink which scared me. Stephen was panicked and called our Dr. emergency line and the Dr. that was on call (not our Dr.) thought it was just a bad cold and said if I couldn’t catch my breath then we should go to the hospital. Luckily, I was able to calm myself down. It happened a couple of weeks ago and when we told our Dr. she knew right away it was a bad acid reflux episode and told me to switch to a higher medicine and some foods to avoid for dinner. There are prescription options but so far Prilosec is working wonders as long as I remember to take it each day. 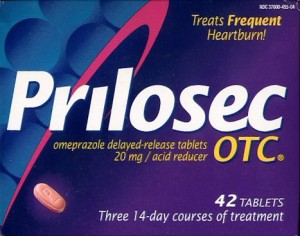 Other than those big things, I have been tired, emotional and forgetful. I didn’t want to believe that pregnancy brain was a real thing but I have been really frustrated lately. I can’t recall things that I know, I loose track of time, I feel myself slipping, bills have been late and just overall I am not myself. My Dr. explained it that your brain is just so consumed with preparing for this baby that you are even subconsciously thinking about the baby that you just don’t have as much room for everything else. That explanation does make me feel better but there are times where I get so frustrated about missing something that I emotionally breakdown. Last night was one of those nights. I was going through our bills and was frustrated because I couldn’t recall things or even think of the word “caulking” for some reason and I just started bawling. Again, I am lucky to have Stephen around. It will be humorous one day to think of these things (if I can even remember them happening).

We have had a few little symptoms come up like shoulder pain, swelling, blurry vision, headaches, etc. I called the Dr. on Thursday because the vision thing usually happens after work so I have associated it with the computer screen but that morning it was much worse and happened on the way into work. I just wanted to know if that was normal or if she recommended that I go to see and eye doctor. They had me come in to check my blood pressure, which was 139/87. Early on in the pregnancy I had some high readings but not that high and the past couple of appointments my readings have been very normal so that was shocking.

My Dr. decided to run some tests because she wants to make sure I am not developing Preeclampsia. She said she would be really concerned if my BP was 140/90 or higher so I was really close to that. She ordered some blood work and a 24 hr urine sample. I had never heard of the 24 hour test but basically they give you this huge jug to collect your sample in and you have to keep it refrigerated until you are ready to take it to the lab. They wanted me to do this on Friday at work, but with how many times a pregnant lady goes to the bathroom and sharing a fridge with a bunch of coworkers, I didn’t think a “biohazard” bag would be so great. Good thing we were close to the weekend. My Dr. wouldn’t tell me next steps until we find out if there is anything to be concerned about, which is good but also leaves worry about the unknown. We won’t have the test results back for a few days but after talking to my dad and finding out Preeclampsia can be serious but can also be managed if found early, really helped me feel better about the whole thing. We will see what happens, hopefully everything continues without too much issue.

I am getting really excited to meet this little man of ours. I hope he stays in as long as possible so he can be healthy and keep growing. I can’t believe we only have 8 weeks left before we become parents! It is going to be great!